I would like to stress the timely removal of silicon oil in patients who have undergone successful vitreo retinal surgeries. Sometimes primary retinal surgeons not remove the oil in time & patient becomes blind because of Glaucoma. the following two cases illustrate the point.

·         This 31 yr old male patient presented to me on 4-2-13, with complains of blurred vision in right eye. He had been operated vitrectomy with oil for retinal detachment on 13-12-2010 elsewhere.  He had previously undergone LASIK and multifocal IOL implants in both eyes elsewhere.

·         The BCVA in RE was CF 3 mts and slit lamp showed multifocal implants. Fundus showed glaucomatous disc in right eye and myopic disc in left eye, with myopic macula in both eyes. He was on treatment with Combigan, Misopt and ganfort eye drops, and IOP was 13 mm Hg in RE.

·         Patient had stopped  all glaucoma treatment as he was loosing vision.

In above 2 patients timely silicon oil removal could have controlled glaucoma better & saved usedfull vision. In my opinion quiet  a few retinal surgeons are scared to remove silicon oil with fear of retinal redetachment. However with good previous retinal surgeries & case selections this can be minimized to a great extent by timely removal of silicon oil  & we would be able to save the eye from potencially blinding glaucoma. 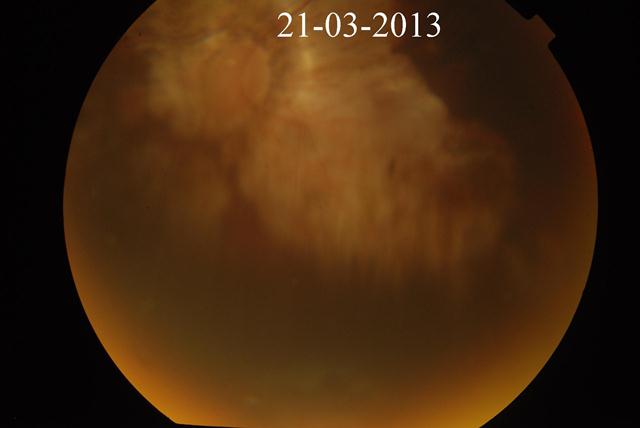